While preparing for Pitt Dance Ensemble’s spring concert, “Awakening,” Emma Zawacki choreographed one of the most challenging tap dances she has ever performed to “Big Blue Swing” by Tap Five.

“I choreographed with a friend [Caitlyn Berrini]. It was our first time choreographing a piece of this magnitude,” said Zawacki, a junior microbiology and gender sexuality and women’s studies major. “I just love this dance. We picked a very fast song and it’s really challenging, but I’m excited to see it all pay off and come together.”

“Big Blue Swing” was a 1900s-inspired tap dance consisting of eight PDE dancers dressed in rustic farmhouse costumes. PDE performed 15 dances during “Awakening,” which took place Friday and Saturday in the Richard E. Rauh Theatre. The show had a nearly full house for every performance, and each dance showcased a different style — including ballet, tap, jazz and modern.

Zawacki has been part of PDE since her first year at Pitt, where she currently acts as business manager. She said it was the PDE board’s responsibility to produce “Awakening” in its entirety since the retirement of Susan Gilis Kruman, the program’s former adviser.

“In the fall, it fell on us to plan the entire show 一 so this was seven undergrads trying to figure out how to produce a show,” Zawacki said. “It was definitely kind of crazy, but it bonded us more than I ever thought it would.”

The PDE board selected everything for the show, including its name, advertisements, dance styles, lighting designers and venue. Zawacki said the board named the show “Awakening” as many activities have returned in-person compared with earlier in the COVID-19 pandemic.

“When we plan the show names, we kind of plan them working together,” Zawacki said. “Our fall show was called ‘Metamorphosis,’ so it’s just about coming back to dance like normal after being isolated and online for so long. We all kind of forgot what it was like to dance with people.”

Every piece in “Awakening” was choreographed by PDE’s current students and alumni, as well as work from local professional dancers Jil Stifel and Ethan Gwynn. Zawacki said a tremendous amount of effort was put into this concert, since most of the dancers rehearsed separately and recorded their concerts last year.

“Last fall, I was in a tap piece and we would have rehearsal on Zoom, so I was in my dorm room tapping in socks trying to learn this choreography,” Zawacki said. “When we went to record it for the show, we went outside and then a few people had wooden tap boards that they brought out and so we just recorded it in small groups.” 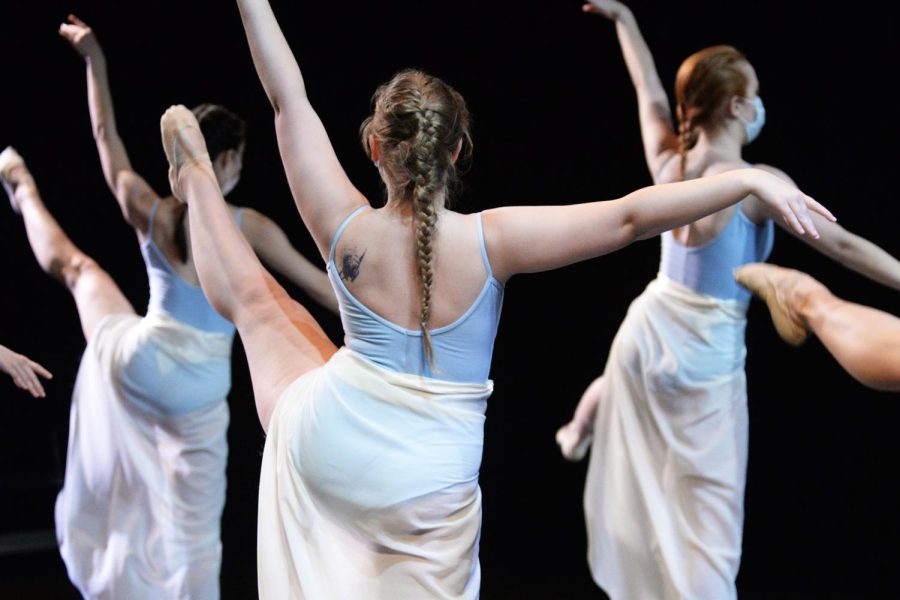 Marie Akoto, a senior political science and English writing major, is PDE’s secretary. She choreographed the piece “You Give Me Fever” with PDE member Jacqueline Perich, a jazz-inspired piece to the song “Fever” by Peggy Lee. She said she was excited to perform the dance because it was different from pieces PDE has performed in the past.

“This dance has eight dancers and it’s a more mature dance than what we’ve done in the past. This one is fun too, but it’s more about love and lust,” Akoto said. “I’m very excited to do something a little bit more serious with jazz than what’s typically expected of it.”

Akoto said “Awakening” was bittersweet for her since, as a senior, it is her last performance with PDE.

“I’m so excited, I’m also so sad because this is my last time dancing because I’m a senior so I’m crying and smiling at the same time,” Akoto said. “I made a lot of lifelong friends. The person I’m choreographing with [Perich], we’re moving to the same city next year and living together.”

PDE seniors collaborated to choreograph the last dance of “Awakening,” “2ENIOR2.” The piece was a modern dance inspired by “Dance Moms” and featured a mash-up of various 2010s hits. Lauren Byrne, a senior political science, sociology and psychology major, said the seniors tried to incorporate as many dance styles as possible into the piece.

“Part of the reason why we make it a collaborative piece is because as seniors, not all of us are dancing the same style, so we really try to play to that,” Byrne said. “The tap dancers get to choreograph their little section, the ballet people get to do their little section, so each person kind of has the opportunity to showcase the skills and the talents that they have.”

Byrne, PDE’s merchandise chair, said one of the most distinctive aspects of the show was its venue, as the ensemble usually performs in the Stephen Foster Memorial. Unlike traditional dance concert venues, the Richard E. Rauh Theatre’s stage is very close to the audience seating, so many dancers made direct eye contact with audience members while performing.

“I think we had to work to kind of keep that in mind and create a dance that looks good from every angle,” Byrne said. “So that was an added challenge, but I think it makes for a really great show.”

Byrne said “Awakening” was successful because of the teamwork between PDE and its alumni and professional choreographers.

“I think it really highlighted the need to rely on other people and work as a team. This could not happen without every single person working hard at what they love, and you can feel that in the studio,” Byrne said. “It reminds me to kind of get out of my head a little bit 一 all these people center you back into why you dance in the first place.”