It’s not easy having eyes all over the scene, being around to take in all the wild visuals at all the worthwhile places in the city. There are, however, those parties and gallery openings where a fortunate photographer can point and shoot. Every week, in collaboration with World Red Eye, New Times brings you a solid recap of all the recent experiences you might’ve missed around Miami. It’s impossible to be everywhere, but, hey, we can try to keep our Eyes on Miami.

Travis Scott took partygoers to the moon on Saturday night when he performed at The Oasis Wynwood for the official Rolling Loud after party.

Lil Baby at the Rolling Loud after-party at LIV? Yes indeed! On Saturday night the rapper took center stage for a killer performance, while 42 Dugg, Winnie Harlow, Teyana Taylor, Anitta, Josephine Skriver, and Mack Maine supported from the crowd and celebrated until the early morning.

Support the independent voice of Miami and
help keep the future of New Times free.

For the final day of Rolling Loud, celebrities including Shaggy and Flo Rida gathered at the festival’s exclusive Loud Club for the ultimate VIP experience. 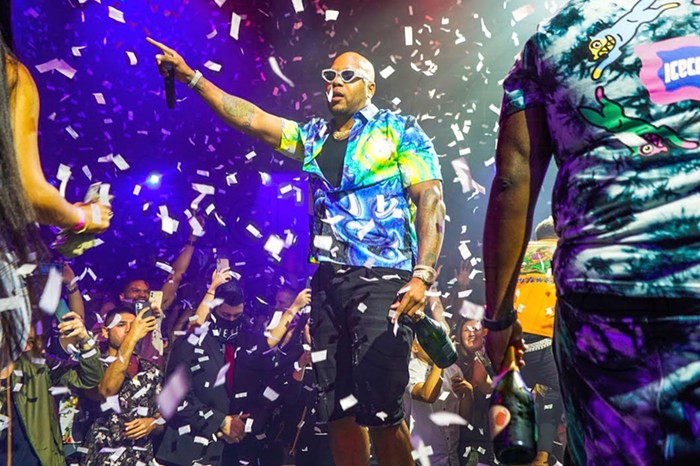 Flo Rida made E11even his house on Thursday night when he took over the club and gave an insane performance for the City of Miami 125th anniversary after-party.

Young Thug brought the drip to Story on Saturday night when he took over the club for the official Rolling Loud after party. Flo Rida was also spotted joining in on the festivities and partying with friends.

Riverside brought one of the best parts of Latin culture to Brickell’s Backyard, Salsa dancing! The Miami Salsa Congress led a salsa workshop with instructors Delia Madera and Raul Valenzuela, followed by an evening filled with Latin dance moves and great entertainment.

Beyond Protocol, a blockchain project operating in stealth mode which plans to launch this fall, threw a weekend party in Miami at Star Island for its team and it looks like a lot of interesting names were in attendance.

“Where There Is Power” Opening + Resident Night at Oolite Arts

Oolite Arts celebrated the opening of its newest exhibition “Where there is power” along with its quarterly Resident Night. The works in this new exhibition, organized by Amanda Bradley and René Morales, represent some of the ways in which artists access, spy upon, expose, memorialize, and occasionally trouble the machinations of state power.

Over 30 local artists donated works for a silent auction at the Museum of Graffiti to help raise awareness for the dire need to free political prisoners in Cuba.

With “Brighter Days,” The Office. presents its first solo exhibition of Thrush Holmes. The opening night of the exhibition was held at The Office. art gallery in Miami Design District, with a private event for clients, family, and friends.

Diosa Fridays at Kiki on the River

On Friday night, Kiki on the River kicked off Diosa Fridays, a new weekly dinner party hosted by Miami Vice Marketing Group. Miami’s hottest crowd and most alluring eye candy were invited to “celebrate your inner goddess” over crisp cocktails, delicious cuisine, and with sounds by Mario Duran and Uno Mas. The party continues every Friday evening.

Guests at Swan began their week on an exciting note as they headed to the Miami Design District hotspot for an epic dinner party with sparklers, music, and live entertainment.

Marion‘s Thursday night soirée is the perfect way to jump-start the weekend, as guests can enjoy dinner, drinks, music, and entertainment all in one place.

Wednesday night at Komodo Lounge popped off like never before, as guests packed the room from wall to wall to party the night away with endless bottle parades and plenty of dancing.

BOHO House was vibrating with energy on Friday night, as guests danced the evening away in the courtyard to music curated by Malóne.