They’ve been waiting to get back on stage as theatres finally re-open following the Covid lockdown.

So it was no surprise that Strictly Come Dancing pros Nadia Bychkova, Amy Dowden, Aljaž Škorjanec and Graziano Di Prima were in high spirits as they arrived to rehearse their Here Come the Boys show at The London Palladium on Tuesday.

The stars, who appear in the dance show with Pasha Kovalev and Robin Windsor arrived at the theatre to begin preparations as audiences continue their much-anticipated return to the theatre. 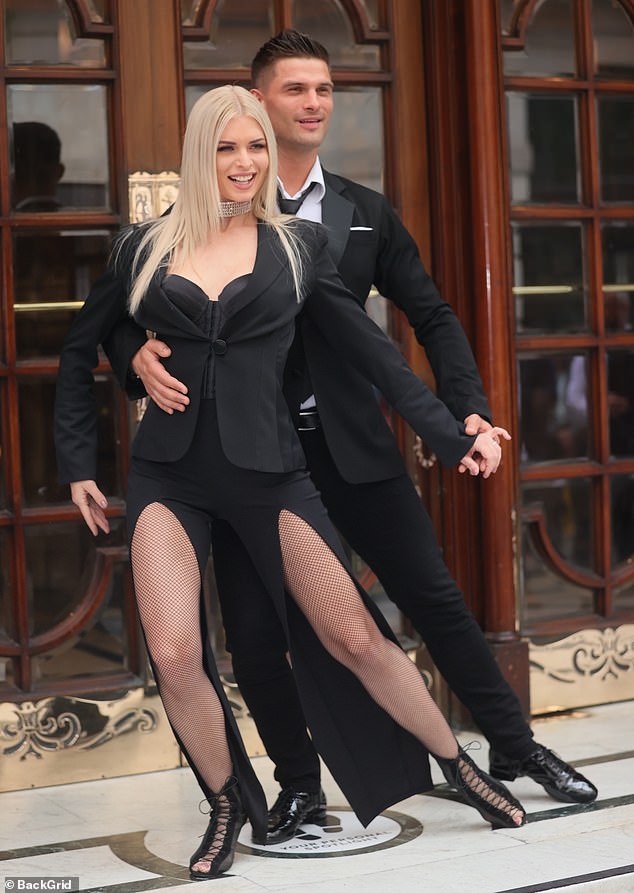 Wow! Strictly Come Dancing pro Nadia Bychkova made a bold statement in a daring black dress as she joined Aljaž Škorjanec at the London Palladium ahead of Here Come The Boys 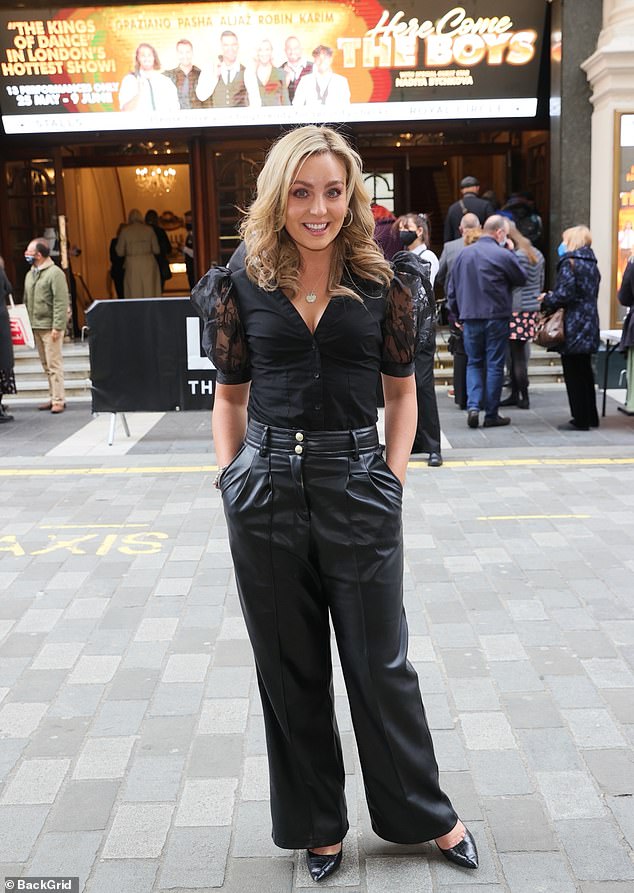 Nadia, 31, dressed to impress in a form-fitting all-black ensemble as she posed for promotional snaps outside the theatre alongside Aljaž, 31, and fellow pros Graziano, 27, Robin, 41, and Pasha, 41, as well as guest performer Karim Zeroual.

The dancer offered a glimpse of her toned abs in a lace black crop top and oversized trousers as she strutted into the theatre to prepare for the show.

Nadiya beamed as she headed into the venue before changing into a racy black dress with daring thigh-high splits teamed with a matching tailed coats.

Clearly channelling the vintage era of dance, the male pros were all dressed in matching black and white tuxedos as they posed for group snaps ahead of the show. 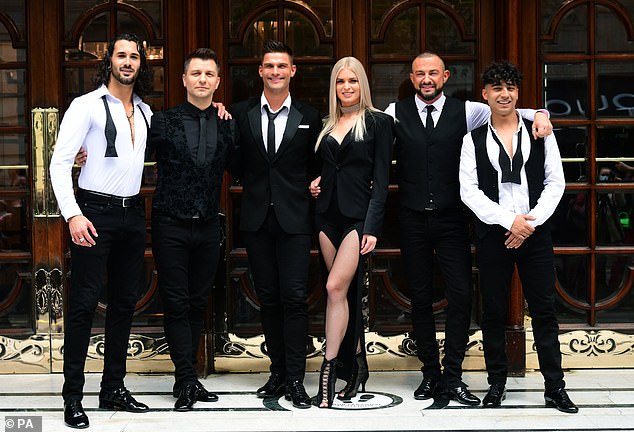 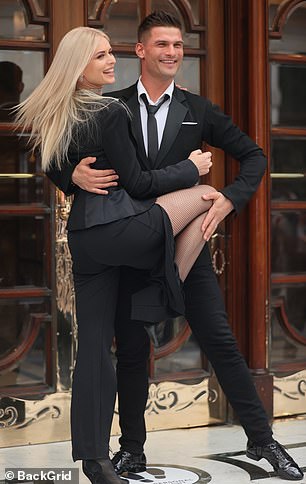 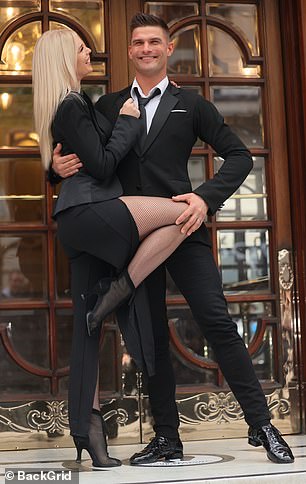 Fun: Nadia posed up a storm in a thigh-skimming black dress with a blazer top as she posed for promotional snaps with dancer Aljaž 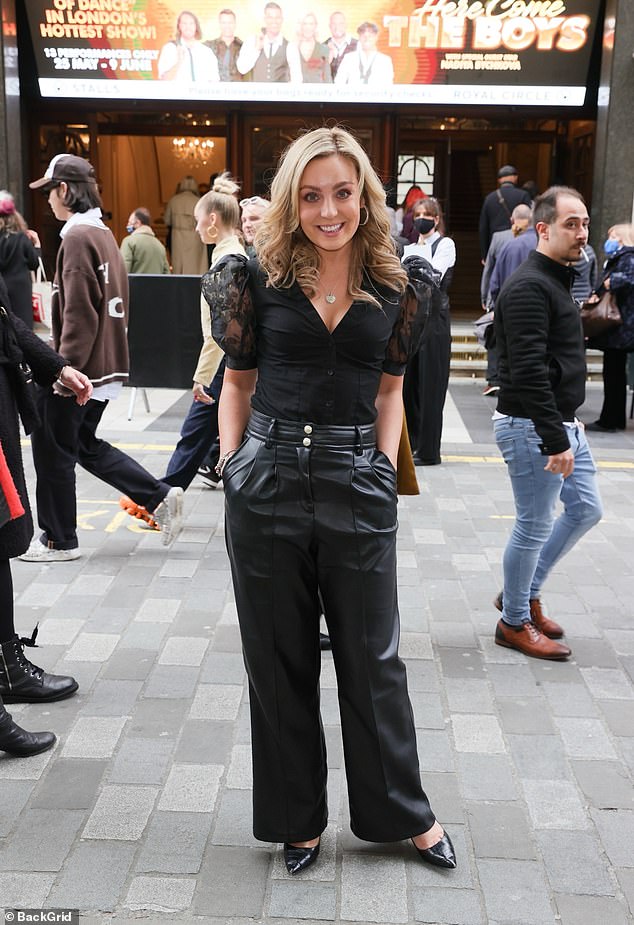 All smiles: Amy beamed as she posed for snaps outside the venue on Tuesday night 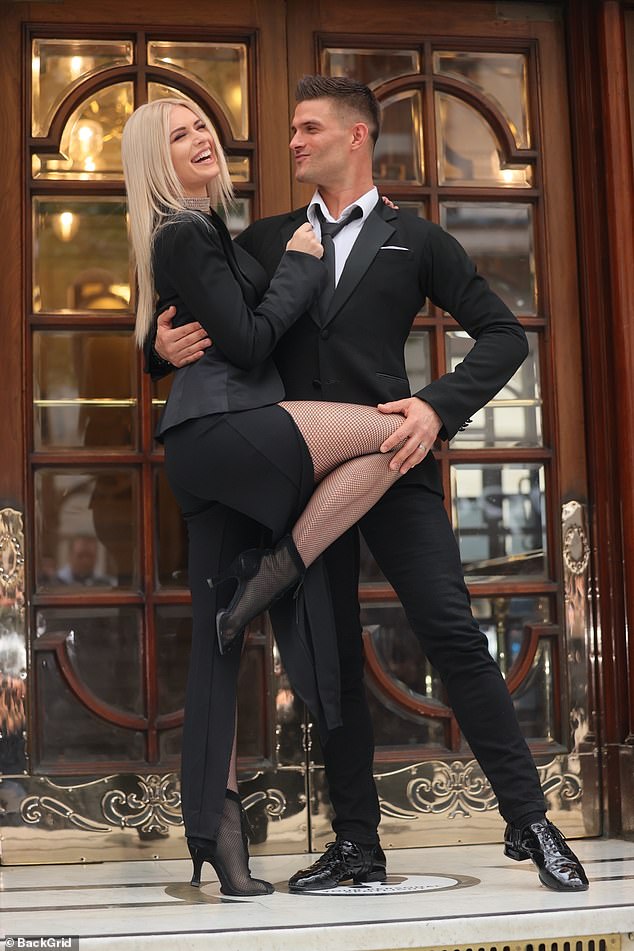 Cheeky: After months of delays due to the Covid pandemic it was no surprise that the pair were in high spirits 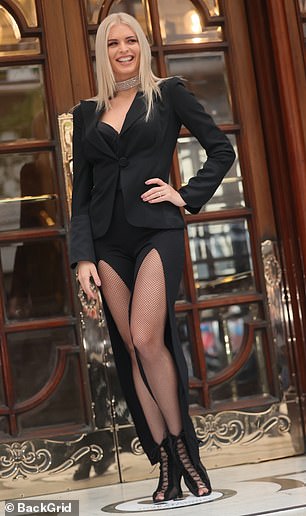 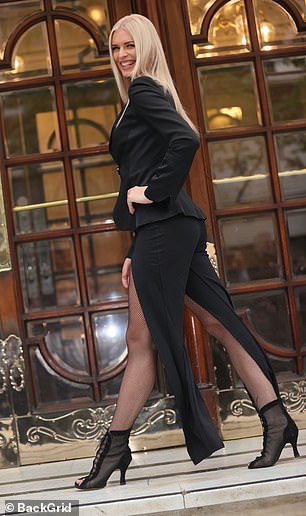 Sexy: Nadiya teamed her ensemble with sheer stiletto boots and a sparkling choker necklace as she got into the theatre mood ahead of the show’s launch 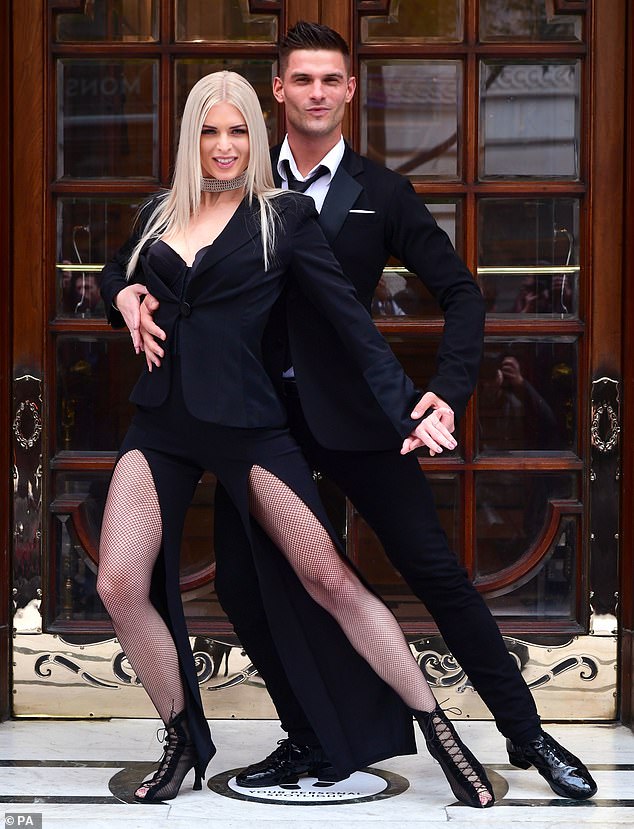 Smile: She and Aljaž posed up a storm together as they prepared for audiences’ return following the Covid lockdown 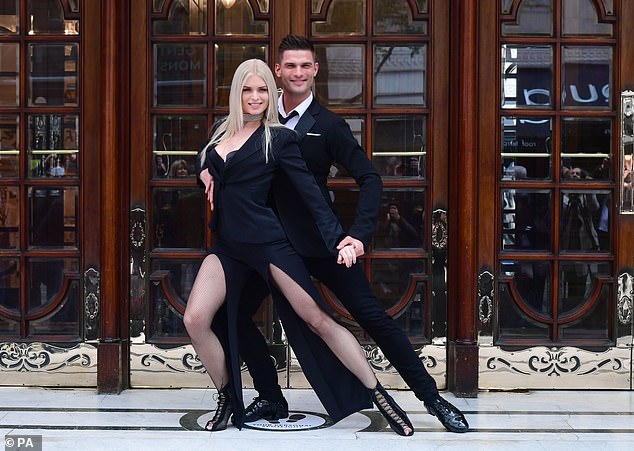 Sharp: Aljaž cut a dapper figure in a smart black suit as he got suited and booted ahead of the show’s opening night on the West End 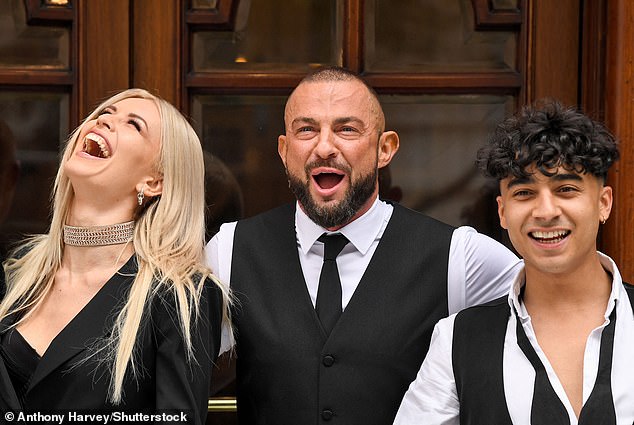 Let’s dance! As the group posed outside the theatre, they were clearly ready to get back on stage again 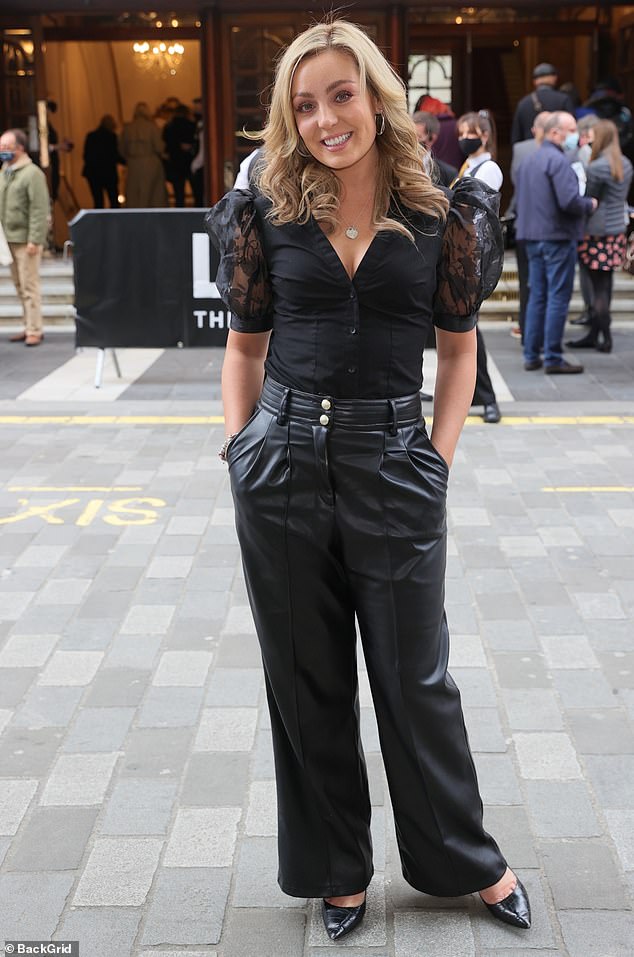 Glowing: Amy wore her honey tresses in curls over her shoulders and opted for a full face of makeup

Earlier in the day, Aljaž, who joined Strictly in 2013, cut a casual figure in an all-grey ensemble as he wheeled his suitcase of belongings into the theatre after donning a blue face mask.

Meanwhile Graziano, who joined the show in 2017, opted for an eye-catching leather jacket as he posed with his fiancée Giada Lini.

The Italian dancer had also taken to Instagram to throw his support behind a campaign for the Future Dreams Charity, highlighting the concerning statistic that one in seven women will be diagnosed with breast cancer in their lifetime. 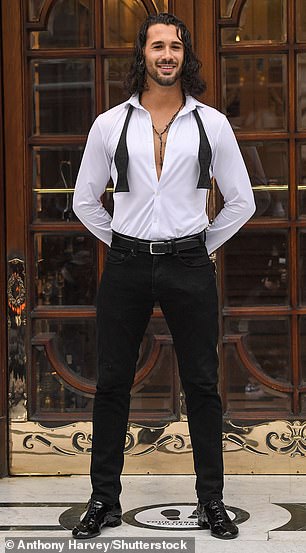 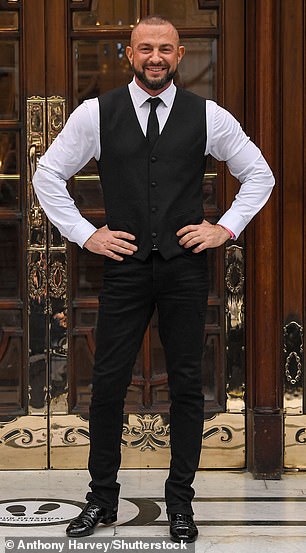 Smart: Graziano (left) and Robin were both suited and booted ahead of the theatre show 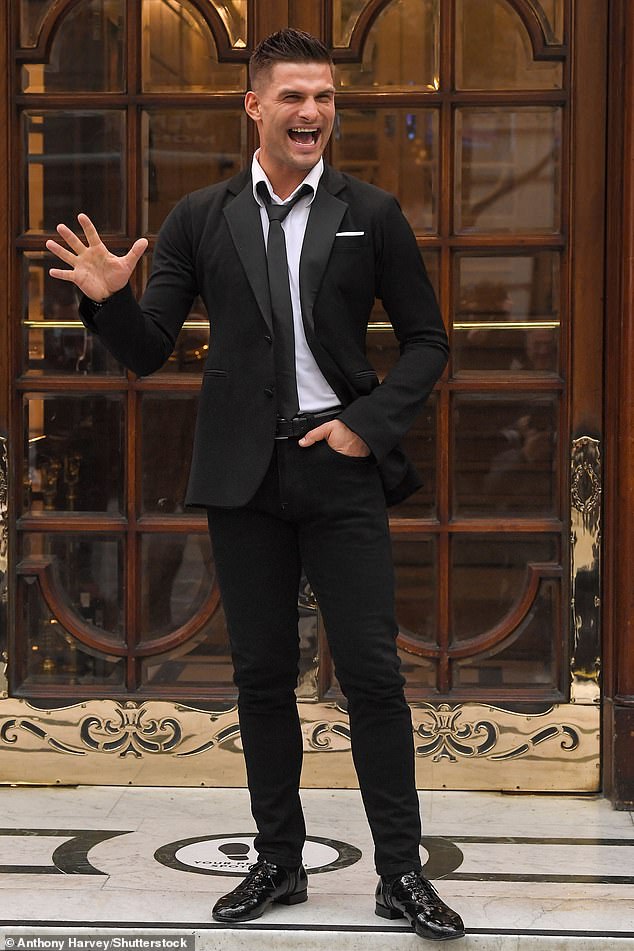 Suit up! Aljaž also posed in his own smart black suit 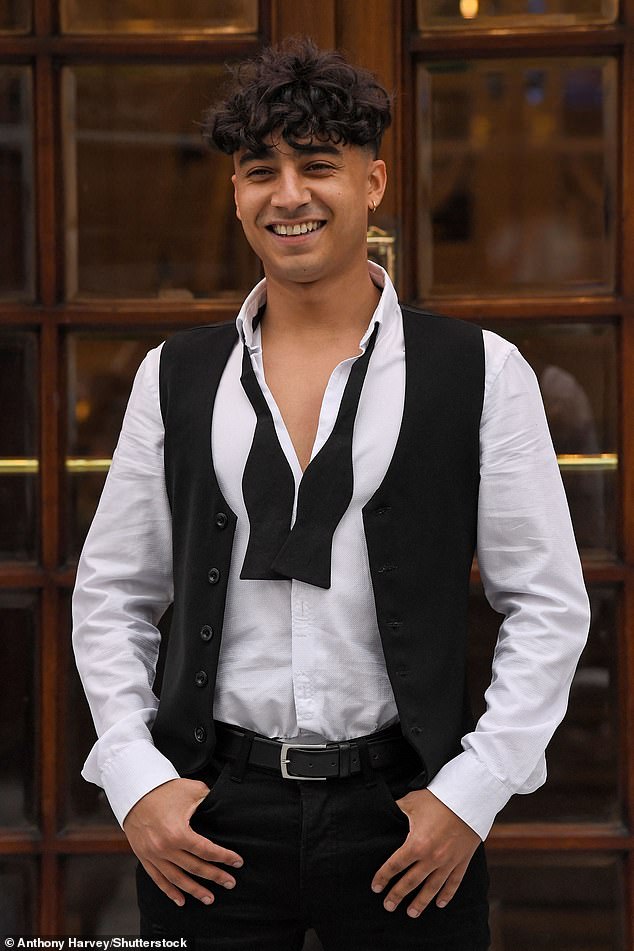 Beaming: Karim – who completed on Strictly in 2019 – sported an open black tuxedo to pose for snaps ahead of the opening show 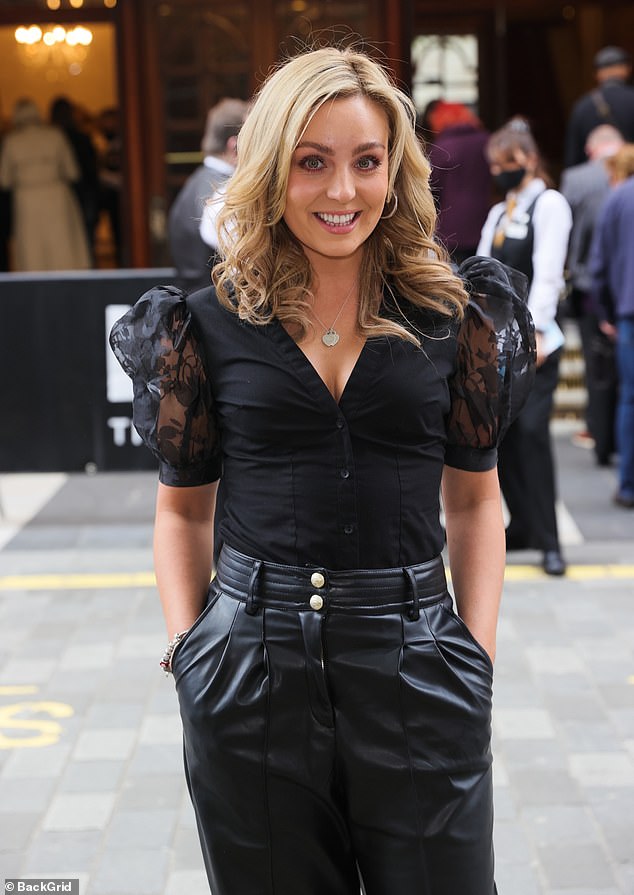 Beautiful: Amy showed off a hint of her ample assets in the plunging blouse which featured lace peplum sleeves 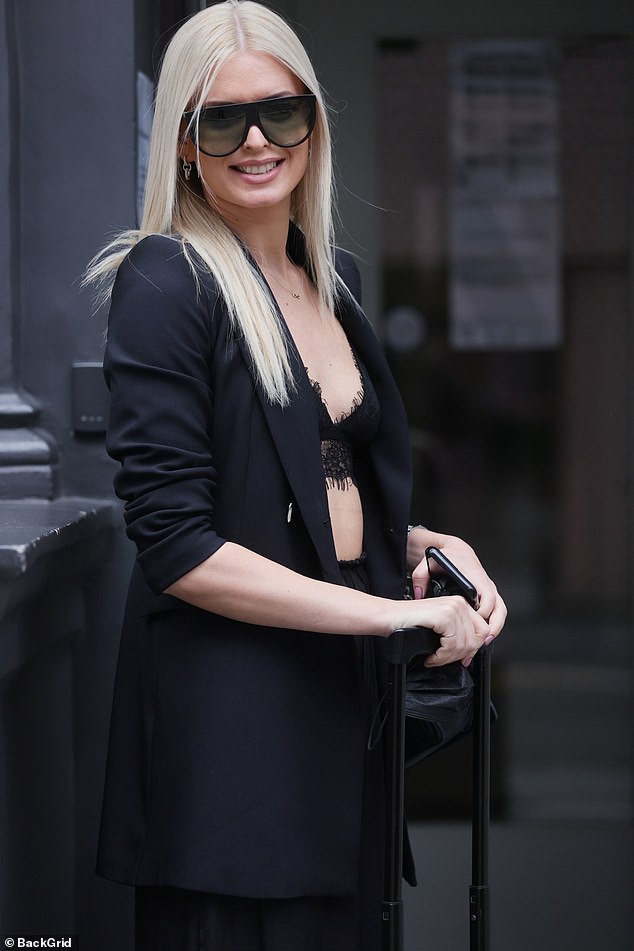 Chic: Earlier Nadiya put on another revealing display as she made her way into the theatre for rehearsals 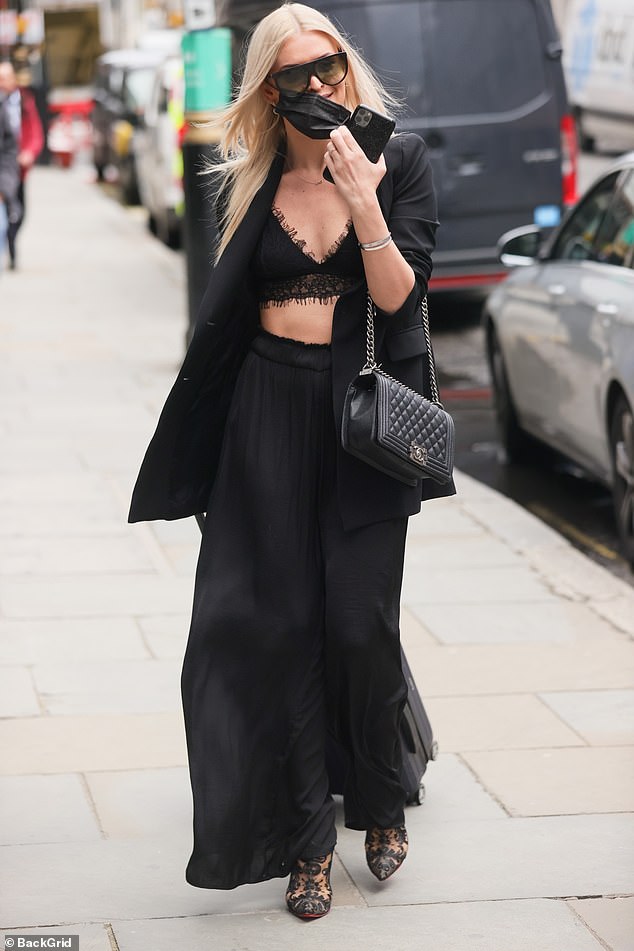 Wow! She opted for a lace black bralet teamed with loose-fitting flared trousers, carrying her essentials in a Chanel Boy bag 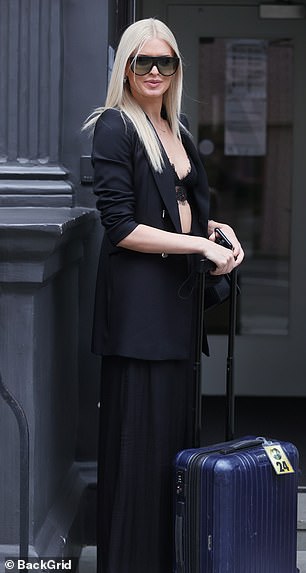 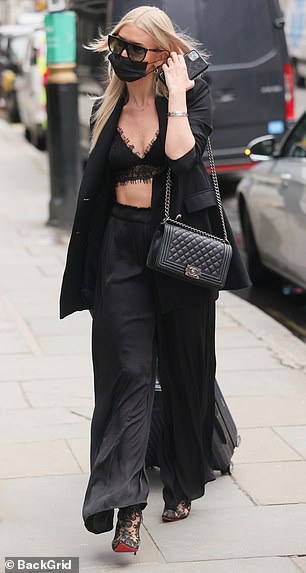 Grand arrival: Nadiya opted for sheer black lace heeled ankle boots with her look as she wheeled her suitcase of belongings into the theatre

Holding a note with a written number seven, Graziano’s post said he was ‘in the corner’ of women who were battling cancer..

Here Come The Boys is finally set to hit the Palladium stage for a 10-day run following a hugely successful nationwide tour.

The West End opening had been delayed multiple times due to the Covid pandemic, and will finally open with a limited audience in accordance with government guidelines. 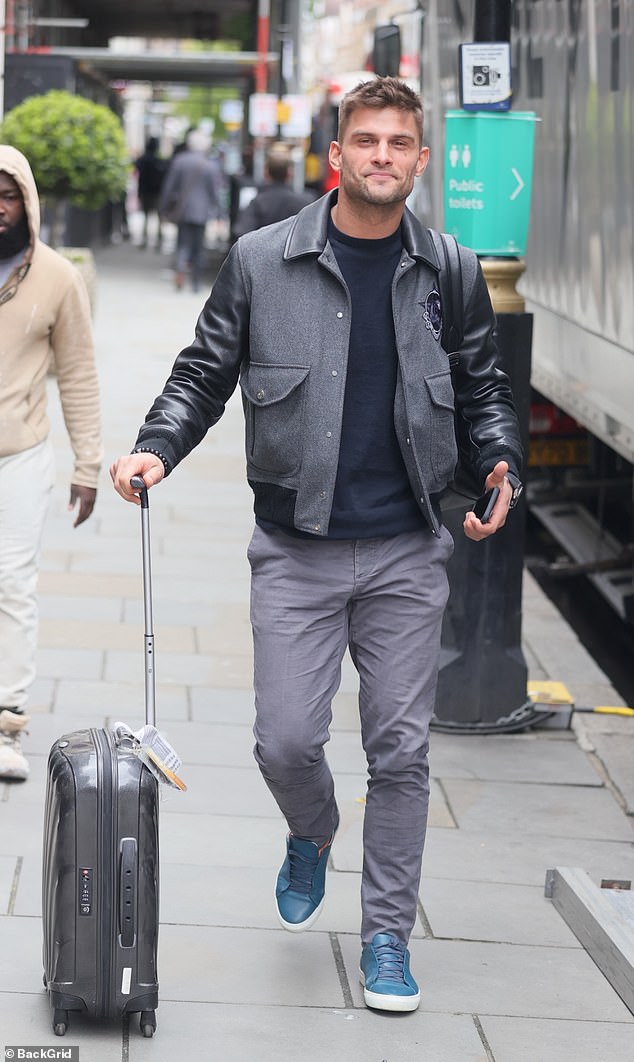 Happy: Earlier in the day, Aljaž, who joined Strictly in 2013, cut a casual figure in an all-grey ensemble as he arrived at the theatre 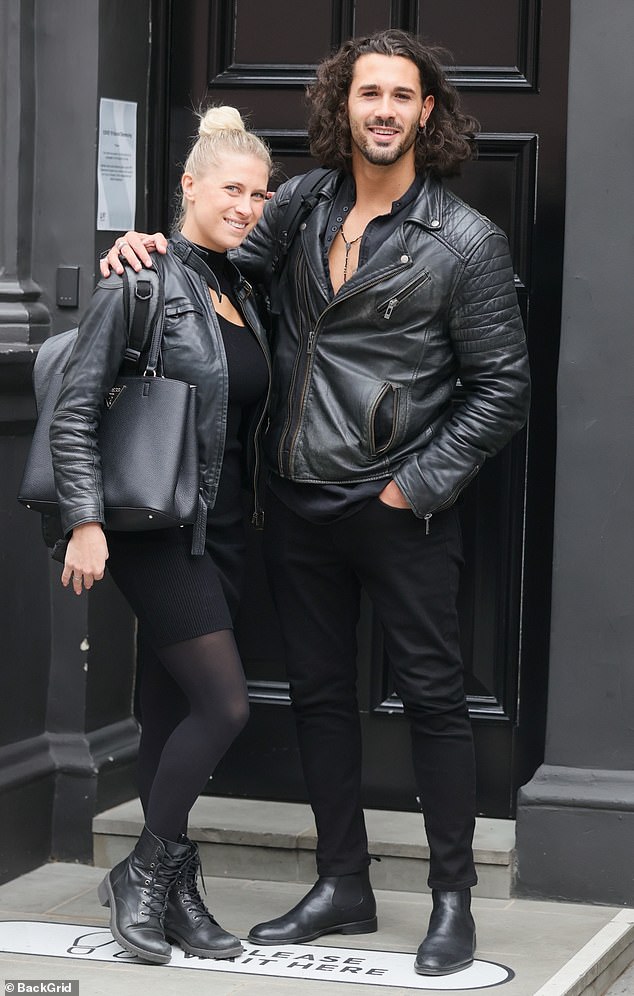 Happy: He was joined by fellow dance pro Graziano and his fiancée Giada Lini to begin rehearsals as the show finally makes its West End debut after multiple delays 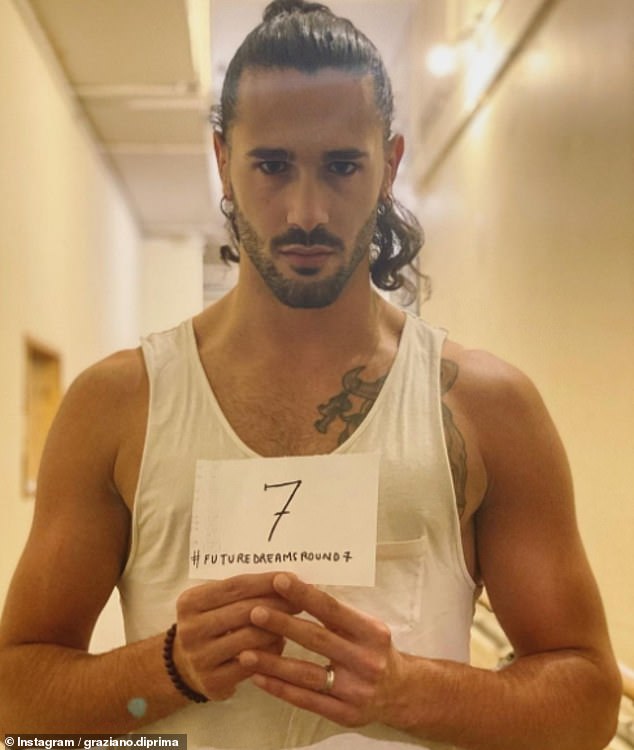 Important: The Italian dancer had also taken to Instagram to throw his support behind a campaign for the Future Dreams Charity 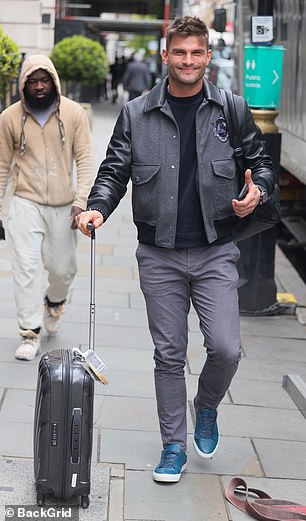 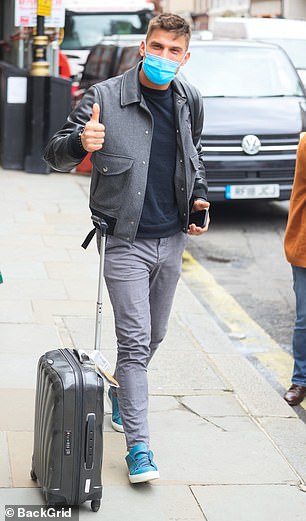 Relaxed: Aljaž beamed at onlookers as he strolled into the venue, ready to perform for a live audience after months of closures 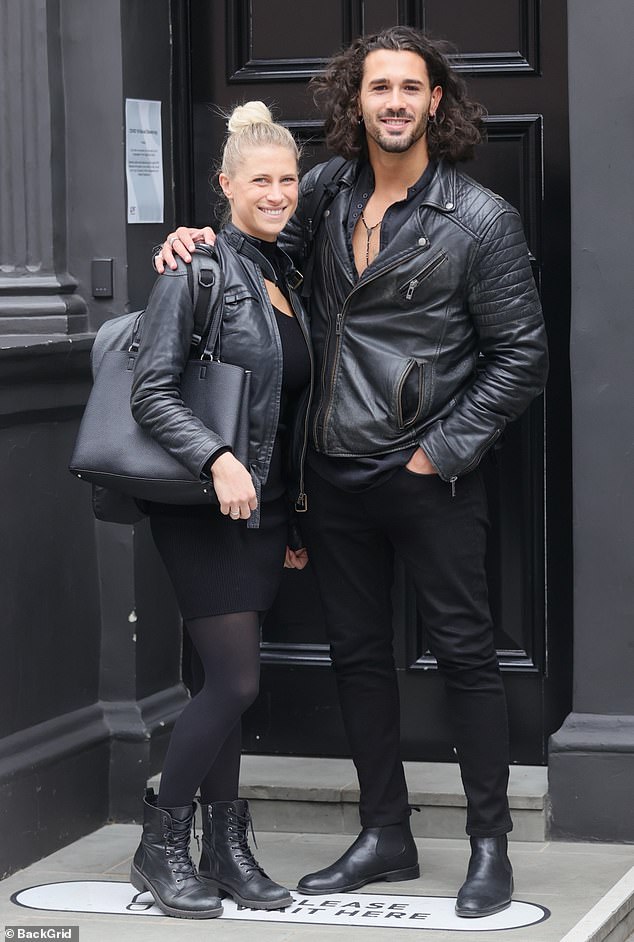 Good spirits: Graziano, who revealed in March that he and Giada had postponed their wedding for a second time, posed for a snap with his bride-to-be

Aljaž and Graziano are both expected to return for the new series of Strictly later this year, after the previous series maanged to make it to air despite the Covid pandemic.

It comes after Aljaž’s wife Janette Manrara credited Strictly with saving their relationship, as they’d both been considering travelling back to their native countries when BBC bosses offered them jobs on the show.

She told The Sun: ‘Strictly Come Dancing, it saved us. It saved us really, in every way. We were going to try the long-distance thing and see what happened.

‘So when we got that phone call to join Strictly it didn’t only give us stability workwise, it saved our relationship.’

The talented duo tied the knot in 2017 after getting engaged two years prior. They have been permanent members of the Strictly line-up since 2013. 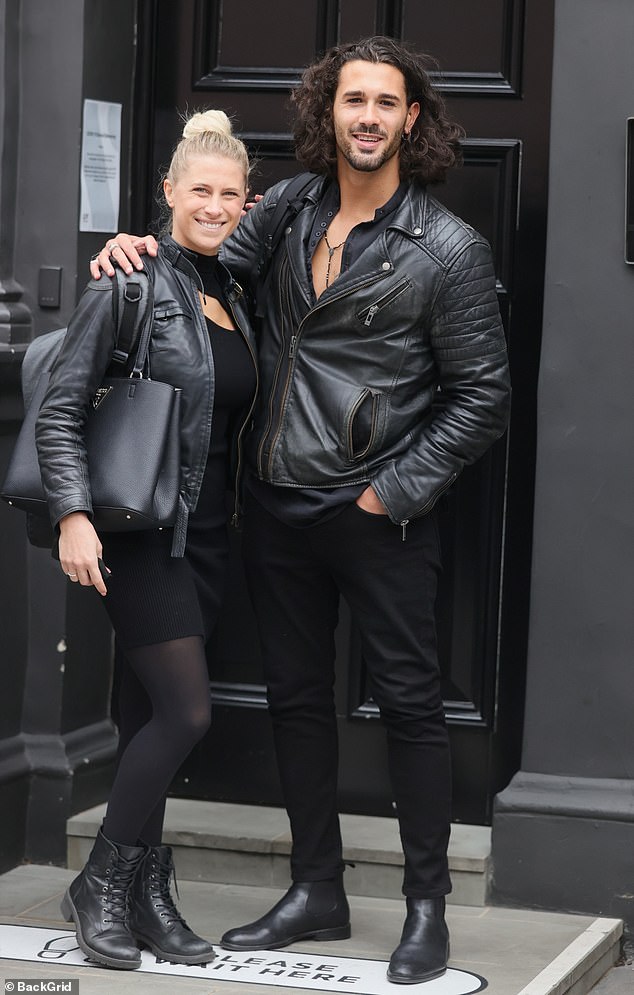 Anticipated: Here Come The Boys is finally set to hit the Palladium stage for a 10-day run following a hugely successful nationwide tour 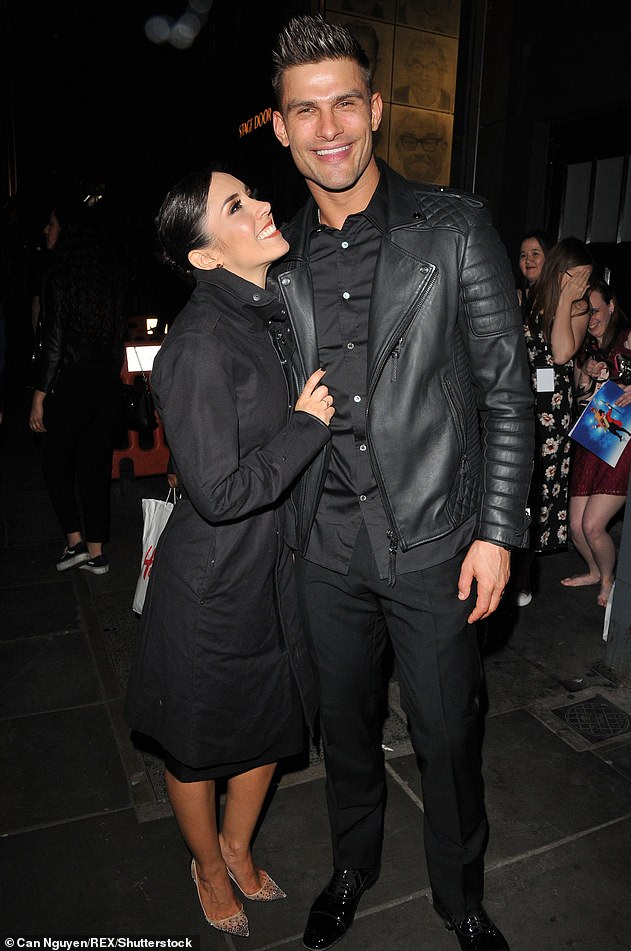